Mess with the bull, get the horns 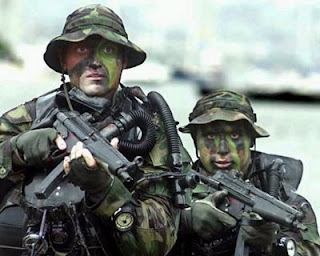 The Seals were able to take the shot that all Sailors out there know that they were capable of and I am sure more than willing to do.

U.S. naval forces rescued cargo ship captain Richard Phillips from captivity at
the hands of Somali pirates in a dramatic shootout that ended a five-day
standoff, the U.S. Navy said on Sunday.
The U.S. Navy said Phillips was freed
unharmed and that naval forces killed three of four pirates who had held him
hostage on a lifeboat after trying to seize his vessel. It said a fourth pirate
was in custody.

Initial reports from CNN said Phillips, who first tried to escape on Friday, jumped overboard just before a shootout between his captors and U.S. Navy Seals.

Scub three ass hats. Now we have one in custody that the liberal media I am sure will parade around as a martyr because the bad ole military somehow infringed on his rights. Never mind he was holding an AMERICAN citizen hostage. I just wish that they were able to snuff the fourth and tied up all loose ends. The television is currently spewing that Justice will be served when the "pirate" has his day in court. Personally I think that Justice was served and the laws of the sea were followed in taking these guys out with no mercy.

BZ to the operators for the difficult shot taken on a bobbing target at sea. BZ to the Banbridge and her crew for keeping station and not letting these nimrods slip off into the night. Our Navy should take down all pirates who choose to interfere with an American ship or an American crew.

From the brain housing group of Nereus sometime around 1:51 PM

I'll join and say Hi just based on the fact that I'm a fellow bubblehead. Nice to meet ya.
Ryan.