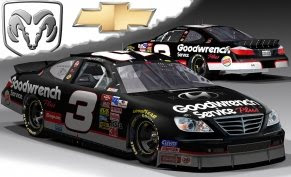 Obama Orders Chevrolet and Dodge Out Of NASCAR

I have Quoted a few lines from the article found Here

In a move sure to spark outrage, the White House announced today
that GM and Chrysler must cease participation in NASCAR at the end of the 2009
season if they hope to receive any additional financial aid from the government.
Companies around the globe—Honda and Audi, to name two—have drawn down racing
operations, and NASCAR itself has already felt the pinch in the form of reduced
team spending. A complete withdrawal from America’s premier racing series is
expected to save more than $250 million between GM and Chrysler, a substantial
amount considering the drastic measures being implemented elsewhere.

NASCAR officials remain tight-lipped about the call, but sources
say series president Mike Helton and team managers are exploring several
options, including other manufacturers to fill Chevrolet and Dodge’s vacated
positions. Given the company’s recent interest in motorsport and the steady
cash-flow and V-8 engine provided by its new Genisis Sedan, sources indicate
that NASCAR is pinging Hyundai to gauge the Korean company’s interest in
occupying a spot in NASCAR. “Toyota was not well-received their first year in
the sport, nor was their first season an easy one,” the source says. “But they
learned, they applied the lessons, and they have proven very competitive this
year.”

If Hyundai does indeed join the series, there will no doubt be a steep learning
curve, and the move would leave Ford the lone domestic battling a pair of Asian
makes in America’s most popular racing series. We wonder, however, how long
NASCAR could hold that title without two of its most storied participants

April Fool
From the brain housing group of Nereus sometime around 8:50 AM