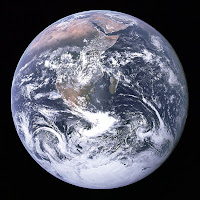 The rocky, wet, oblate spheroid—a rounded shape with a bulge around the equator—although the precise shape (the geoid) varies from this by up to 100 meters that we wake up to with the star we orbit rising to the east each day has completed yet another orbit of the Sun, a yellow dwarf star, spectral type G2.

The Sun lies close to the inner rim of the Milky Way Galaxy's Orion Arm, in the Local Fluff or the Gould Belt, at a hypothesized distance of 7.62±0.32 kpc (24,800 light years) from the Galactic Center.
The distance between the local arm and the next arm out, the Perseus Arm, is about 6,500 light-years. The Sun, and thus the Solar System, is found in what scientists call the galactic habitable zone.

The Apex of the Sun's Way, or the solar apex, is the direction that the Sun travels through space in the Milky Way. The general direction of the Sun's galactic motion is towards the star Vega near the constellation of Hercules, at an angle of roughly 60 sky degrees to the direction of the Galactic Center. The Sun's orbit around the Galaxy is expected to be roughly elliptical with the addition of perturbations due to the galactic spiral arms and non-uniform mass distributions. In addition the Sun oscillates up and down relative to the galactic plane approximately 2.7 times per orbit. This is very similar to how a simple harmonic oscillator works with no drag force (damping) term. It has been argued that the Sun's passage through the higher density spiral arms often coincides with mass extinctions on Earth, perhaps due to increased impact events.

It takes the Solar System about 225–250 million years to complete one orbit of the galaxy.

So, In the big scheme of things, 2008 as we are counting wasn't all that significant unless you account for the impact we have had on each other

War, poverty and hunger still scourge our planet due to the greed and ego of our fellow man.

Our technological advances have both connected us closer and further isolated us from every day reality.

Our country is on the cusp of either a great change or we will continue in the death spiral of self centered, feeding of the collective national id (The id acts as a pleasure principle: if not compelled by reality it seeks immediate enjoyment. It is focused on selfishness and instant self-gratification.) that will ultimately lower the standard of living here and ultimately the entire world.

With the hope that things will be better, Happy New year.
From the brain housing group of Nereus sometime around 9:28 AM

Let's hope we all find our efforts this year satisfying.