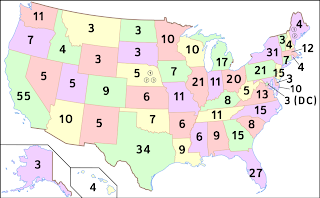 Today, I carefully filled in my mail-in ballot and signed and deposited in it in a mail box.

but will my Vote truly reflect count and truly effect the popular ( what the people want) Vote or will I lose out to the Electoral College??

The process of the highest office in our country is actually a complex process.

Rather than directly voting for the President and Vice President, United States citizens cast votes for electors. Electors are technically free to vote for anyone eligible to be President, but in practice pledge to vote for specific candidates[2] and voters cast ballots for favored presidential and vice presidential candidates by voting for correspondingly pledged electors.[3] Most states allow voters to choose between statewide slates of electors pledged to vote for the presidential and vice presidential tickets of various parties; the ticket that receives the most votes statewide 'wins' all of the votes cast by electors from that state. U.S. presidential campaigns concentrate on winning the popular vote in a combination of states that choose a majority of the electors, rather than campaigning to win the most votes nationally.

The Constitution allows each state legislature to designate a method of choosing electors. Forty-eight states and the District of Columbia have adopted a winner-take-all popular vote rule where voters choose between statewide slates of electors pledged to vote for a specific presidential and vice presidential candidate. The candidate that wins the most votes in the state wins the support of all of that state’s electors. The two other states, Maine and Nebraska, use a tiered system where a single elector is chosen within each Congressional district and two electors are chosen by statewide popular vote. U.S. presidential elections are effectively an amalgamation of 51 separate and simultaneous elections (50 states plus the District of Columbia), rather than a single national election.

Candidates can fail to get the most votes in the nationwide popular vote in a presidential election and still win that election. This occurred in 1876, 1888 and 2000. Critics argue the Electoral College is inherently undemocratic and gives certain swing states disproportionate clout in selecting the President and Vice President. Adherents argue that the Electoral College is an important and distinguishing feature of the federal system, and protects the rights of smaller states. Numerous constitutional amendments have been introduced in Congress seeking a replacement of the Electoral College with a direct popular vote; however, no proposal has ever successfully passed both houses.

I know that living in one of the most liberal states (Washington, Just left of San Fransisco California, Cause all the hippies who couldn't afford to stay in the Silicon Vally, they all moved here) My rather conservative views may not make the differnce of a fart in a whirlwind.


However, Being a Card carrying America Citizen who thinks that the Constitution actually means something, I would rather see the leader of our nation elected by what the PEOPLE *THOSE WHO VOTE and are ELIGIBLE to VOTE* actually want to be in office.

The Past few elections have exposed that the Electoral college is more than likely a Corrupt part of the "Good Ole Boy" system that is undermining our republic and the Democracy of our nation, I foresee that the upcoming election will challenge this system to the up most.

What ever your political Views,

Be an AMERICAN Citizen,

Be the a good neighbor and Help those who need it to Get out and Vote.

Our country needs all of us to make a decision on where we are going in the future
From the brain housing group of Nereus sometime around 8:30 AM

The major shortcoming of the current system of electing the President is that presidential candidates concentrate their attention on a handful of closely divided "battleground" states. In 2004 two-thirds of the visits and money were focused in just six states; 88% on 9 states, and 99% of the money went to just 16 states. Two-thirds of the states and people were merely spectators to the presidential election. Candidates have no reason to poll, visit, advertise, organize, campaign, or worry about the voter concerns in states where they are safely ahead or hopelessly behind. The reason for this is the winner-take-all rule enacted by 48 states, under which all of a state's electoral votes are awarded to the candidate who gets the most votes in each separate state.

Another shortcoming of the current system is that a candidate can win the Presidency without winning the most popular votes nationwide. This has occurred in one of every 14 presidential elections.

In the past six decades, there have been six presidential elections in which a shift of a relatively small number of votes in one or two states would have elected (and, of course, in 2000, did elect) a presidential candidate who lost the popular vote nationwide.


The National Popular Vote bill would guarantee the Presidency to the candidate who receives the most popular votes in all 50 states (and DC).

Every vote would be politically relevant and equal in presidential elections.

The bill would take effect only when enacted, in identical form, by states possessing a majority of the electoral votes—that is, enough electoral votes to elect a President (270 of 538). When the bill comes into effect, all the electoral votes from those states would be awarded to the presidential candidate who receives the most popular votes in all 50 states (and DC).

The bill is currently endorsed by 1,181 state legislators — 439 sponsors (in 47 states) and an additional 742 legislators who have cast recorded votes in favor of the bill.

The National Popular Vote bill has passed 21 state legislative chambers, including one house in Arkansas, Colorado, Maine, North Carolina, and Washington, and both houses in California, Hawaii, Illinois, New Jersey, Maryland, Massachusetts, Rhode Island, and Vermont. The bill has been enacted by Hawaii, Illinois, New Jersey, and Maryland. These four states possess 50 electoral votes — 19% of the 270 necessary to bring the law into effect.