Man, Found out some news today that was like a kick in the stomach after a Google search and finding out it was true.

Found out a mentor and good friend of mine passed on after a long battle with leukemia. Last I had hear he had beat it. But I guess it came back. 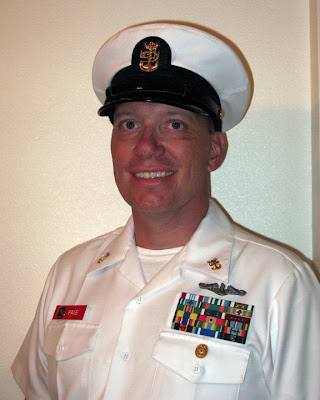 Here is his Obituary

Kevin was born in Port Angeles, Wash., Aug. 10, 1969. Early in his childhood, Kevin moved to Casper and attended Natrona County High School. His hobbies included playing cribbage, backpacking, traveling, golf and scuba diving. Kevin’s proudest moments were serving in Bosnia and as Chief of the Boat of USS Cheyenne (SSN 773).

Kevin joined the U.S. Navy on Sept. 22, 1987. Upon completion of Basic Training, he was enrolled into submarine training at Naval Submarine School, Groton, Conn. Upon completion of submarine school on Jan. 21, 1988, he commenced a one-year training pipeline which included various trade schools for designation as an Electronics Technician, where he was advanced to Petty Officer Third Class.
In February, 1989, he was assigned to his first submarine, USS James K. Polk, (SSBN 645) (BLUE). During this tour Kevin met and was married to Lisa, the love of his life. Upon completion of his tour onboard James K. Polk, in May 1993, he was assigned to the Head Quarters Allied Joint Forces (AFSOUTH) Command in Naples, Italy. During his tour in Naples he provided direct, real world contribution to NATO Commanders during regional and theater conflicts. As a

result of his persistent support and involvement during theater engagement, he was advanced to Petty Officer First Class and was awarded a Joint Service Achievement Medal. Additionally, he was awarded the Defense Meritorious Service Medal for his professionalism and dedication to duty while conducting NATO operations in the former Republic of Yugoslavia.

In October 1997, he was assigned to his second submarine, USS Henry M. Jackson (SSBN 730) (BLUE) in Bangor, Wash., where he served as the Navigation Division Leading Petty Officer and Command Career Counselor. His tour onboard Henry M. Jackson was culminated with his advancement to Chief Petty Officer with follow-on assignment as Division Leading Chief Petty Officer. In December, 2001, he was assigned to the PERS-403 branch at the Navy Personnel Command in Millington, Tenn., where he served as Navigation and Communications Electronics Technician detailer. In this capacity, he provided insightful recommendations to the highest levels of leadership in order to appropriately refine manning policies in order to shape the future of the Navy. Due to his immutable efforts, he was selected for promotion to Senior Chief Petty Officer.

Following his assignment in Millington, Kevin was assigned to his third submarine, USS Tucson (SSN 770), homeported in Pearl Harbor, Hawaii, where he was assigned as the Navigation Operations Enlisted Advisor and reached the highest enlisted rank in Navy, that of Master Chief Petty Officer. During his tour onboard Tucson, Kevin completed qualifications as a Chief of the Boat and served in this capacity onboard USS Cheyenne (SSN 773).

Kevin is survived by his wife, Analisa Gail Page of Las Cruces, N.M., his parents Robert Page, Judy Steffens, Karen Page and Frank Lyman; his siblings, which include sisters Heidi, Stephanie, and Linda as well as brothers Dennis, Benjamin, and Mike; his father- and mother-in-law, Troy and Bettie Evans of Lake Brownwood; and many special aunts, uncles and other family members. He also leaves behind many friends and co-workers too numerous to list. Kevin was an extraordinarily outstanding husband, son, brother, friend, Sailor and shipmate, and will be sorely missed by all.

Don't have a lot more to say right now.. Will write about the good times soon

Rest your oars shipmate
From the brain housing group of Nereus sometime around 9:35 PM

It's a darn shame when one dies young.

Thanks for the blog of his life.

Wow, this is the first I heard of this.

I served with Master Chief Page on the Tucson.

What a terrible thing to have happen. I remember sitting a few qual boards with him. One of the friendliest and most approachable chiefs that I have ever worked with.

My thoughts and prayers go out to his family.