Can you smell the bacon? 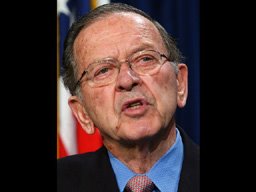 An update on an earlier post. The identity of the Senator who put the secret hold was revealed. The ass covering by various politico’s and the senator himself is enough to put one off their feed for the day.
Quote:
"He does have a hold on the bill," Stevens' spokesperson Aaron Saunders told CNN. "At the time he placed the hold he notified Sen. [Tom] Coburn and his staff and identified several questions we had with the bill. Two weeks ago Sen. Coburn named Stevens as having a hold on the bill, so we don't consider it a secret."

“Saunders said Stevens did not attempt to keep his hold anonymous.
"Sen. Stevens has a series of concerns and questions about the bill. He wants a cost benefit analysis to make sure it doesn't create an unnecessary layer of bureaucracy and not meet its purpose," Saunders said.”

Yeah I’m sure this guy really doesn’t want John Beer drinkin Public to interfere with the manner that he is recklessly spending the cash on various PORK projects. Note the “unnecessary layer of bureaucracy”

"He prefers to handle things at the member to member level or at the staff level," Saunders said. "That's the way Sen. Stevens has always operated."
"This wasn't in any way secretive," Saunders said. "We're baffled as to why it's been called a secret hold."

This ass monkey has a reputation for earmarks for various pork barrel projects that don’t benefit Americans beyond a select few cronies. Example:

"Last year a proposed $223 million for a "bridge to nowhere" connecting Alaska's Gravina Island -- population 50 -- to the mainland caused a nationwide furor. The allocation was backed by Stevens and fellow Republican Rep. Don Young of Alaska, the powerful chairman of the House Committee on Transportation and Infrastructure. The earmarked funding for the bridge was later rescinded by Congress. However, Alaska's overall allocation of federal transportation funds was not decreased, and the state is free to spend the federal dollars to build the bridge if it wishes.
When Coburn tried to block funds for the bridge, he was heavily denounced by Stevens on the Senate floor"
You can read it here:
http://www.cnn.com/2006/POLITICS/08/30/secret.senators/index.html

And what’s really weird, I pulled the “Bridge from nowhere” as an example off the top of my head.
From the brain housing group of Nereus sometime around 3:40 PM

They worship Ted as a God in Alaska. Between the Oil revenues from the north slope and the Federal gimmies he has secured over the years, Alaskan residents are snug as a bug in a bear rug.