With plans to shutter Gitmo, the U.S. Navy has announced its new "catch-and-release" program for terrorists captured on the battlefield.
Yesterday, Navy officials announced that -- consistent with President Obama's directives -- it has released a senior Al Qaeda Terrorist after questioning him extensively for 27 days while being held prisoner aboard a U.S. aircraft carrier in the Arabian Sea.
As a humanitarian gesture, the terrorist was given $50 US and a White 1962 Ford Fairlane automobile upon being released from Custody.The attached photo shows the terrorist on his way home moments after being released by the Navy. 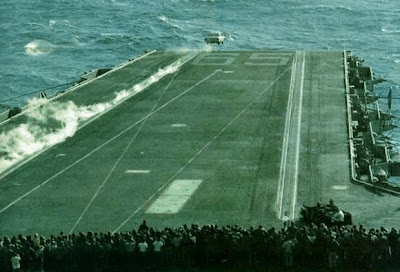 From the brain housing group of Nereus sometime around 10:15 PM

We should charge these prisoners and try them in civilian courts.

Would you like to be held without trial for seven years?