And nothing will come of it. 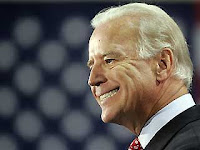 All the time I was in the Navy, I was entrusted with a variety of jobs that involved classified information. It was a routine part of the job, yet is was never treated as routine. It was NEVER something you used as bragging rights to impress the boys over a beer or to gain status at a meeting of a "We wear silly hats or Weird suits" club. It was just something you didn't talk about.

But apparently, the VP, being "Above the law" has seen fit to disclose classified information to schmooze the crowds and gain a laugh.

According to a report, while recently attending the Gridiron Club dinner in Washington, an annual event where powerful politicians and media elite get a chance to cozy up to one another, Biden told his dinner mates about the existence of a secret bunker under the old U.S. Naval Observatory, which is now the home of the vice president.

The bunker is believed to be the secure, undisclosed location former Vice President Dick Cheney remained under protection in secret after the 9/11 attacks.

Good old Joe, Once again filling his pie hole with his foot. Sadly, he has broken the law. Like all the other elitist in this administration, he puts himself above having to actually obey the laws that govern the "rest of us" and won't be censured or penalized in any way for this security breach.

I guess the upside is that it was the secure area designated for him, So he really has only screwed himself. Too bad that there are military and secret service personnel who are required to go in there with him in times of crisis.
From the brain housing group of Nereus sometime around 11:14 AM