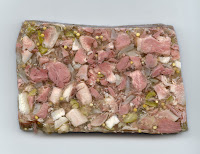 I hear that it is great fried..

Poor Uncle Ted, He might have to go to jail..

I have had a bone in my teeth about Ted Stevens,
Because... Well quite frankly as a Constitutional conservative, I can put up and even admire a rouge character that plays on the outside fringes. Our country is founded and has flourished because we have these types in our midst because they were the mover and shakers who made a change.
But this A$$hole was a Holier than Thou, I deserve it because of who I am, self appointed demigod who helped pave the path for the current administration and political environment.
ANCHORAGE, Alaska -- Sen. Ted Stevens, the longest serving Republican in Senate history, narrowly lost his re-election bid Tuesday, marking the downfall of a Washington political power and Alaska icon who couldn't survive a conviction on federal corruption charges. His defeat to Anchorage Mayor Mark Begich moves Senate Democrats closer to a filibuster-proof 60-vote majority.

Stevens' ouster on his 85th birthday marks an abrupt realignment in Alaska politics and will alter the power structure in the Senate, where he has served since the days of the Johnson administration while holding seats on some of the most influential committees in Congress.

The crotchety octogenarian built like a birch sapling likes to encourage comparisons with the Incredible Hulk, but he occupies an outsized place in Alaska history. His involvement in politics dates to the days before Alaska statehood, and he is esteemed for his ability to secure billions of dollars in federal aid for transportation and military projects. The Anchorage airport bears his name; in Alaska, it's simply "Uncle Ted."


Stevens' loss was another slap for Republicans in a year that has seen the party lose control of the White House, as well as seats in the House and Senate. It also moves Democrats one step closer to the 60 votes needed to overcome filibusters in the Senate. Democrats now hold 58 seats, when two independents who align with Democrats are included, with undecided races in Minnesota and Georgia where two Republicans are trying to hang onto their seats.

It is a testament to Stevens' popularity -- he was once named "Alaskan of the Century" -- that he won nearly half the votes, even after his conviction. He routinely brought home the highest number of government dollars per capita in the nation -- more than $9 billion in 2006 alone, according to one estimate.

With Stevens gone "it's a big gap in dollars -- billions of dollars -- that none of the other members of the delegation, Begich, whoever, could fill," said Gerald McBeath, chair of the political science department at University of Alaska Fairbanks. "There is no immediate replacement for him."

Following the trial Stevens said he wanted another term "because I love this land and its people" and vowed to press on with an appeal. Professing his innocence, he blamed his legal problems on his former friend Bill Allen, the founder and former chairman of VECO Corp., the government's star witness.

In a state where oil and politics have always mixed, the conviction came as part of a long-running investigation into government corruption centered around VECO.

Stevens refused pleas from his own party leaders to step down after the verdict, including Sen. John McCain, the GOP presidential nominee who said the Alaska senator had "broken his trust with the people."

My poor heart is pumping panther piss due to the loss of pork to the Grand state of Alaska and the Oil interests. I am not happy that the Democrats and that Summer of 68 in Berkeley reject N Pelosie are a step closer to turning the house and senate into a shit through a goose institution. But I am glad that the people of Alaska were smart enough to vote for the least corrupt of the competition.

Another close race that is yet undecided, R. Norm Colman against one of the most Flaming Liberal piss poor excuse of human flesh D. Al Franken.
(Not quite mad enough to say that the best part of him dripped down his momma's leg) Oops; was that my outside voice??

Well it looks like there are things afoot at the Circle K with that race, Found ballots, judges, Should be interesting.

With only 206 votes out of 2.9 million total ballots separating Republican Sen. Norm Coleman of Minnesota from his Democratic opponent Al Franken, every vote counts -- including the elusive 32 absentee ballots first reported to be found in a state official's car three days after the election.

4 Reasons that Detroit and the makers of American iron are hearing a chisel tap out the epitaph on the headstones.

This was ripped off from Campbell Brown on the CNN website, she stated what I was thinking but in plain English without the potty mouth.

The heads of Detroit's car companies -- Ford, Chrysler, GM -- bumper to bumper, are begging Congress for a bailout. Let's start by cutting through the bull and look at how the automobile companies got into this mess.

1. Americans are finally starting to turn their backs on those 12 mile-per-gallon SUVs.

Yes, it took us long enough, but we are finally starting to get it. I know, gas prices have fallen back into the $2-per-gallon range, but we all remember what it cost to fill up last summer, when gas was $4 per gallon. And we all know those days will come again.

2. Why isn't Detroit making what we want to buy now?

Where are the hybrids? Where are the batteries? Where are cars that get 70 miles per gallon? For years automakers fought tooth and nail against improving fuel efficiency standards. You say they're in the pipeline? You say we'll get 40-mile-per-gallon cars in 2020? Americans need them now.

It has seemed at times like American car makers think car buyers are so blindly loyal that they will keep coming back -- despite the sticker shock -- for crummy cars that guzzle gas, fall apart too soon, and cost too much to repair. Lots of other companies have figured out how to build better quality, more fuel-efficient cars, and even do it right here in the United States.

GM Chief Executive Rick Wagoner earns almost $9 million a year. Some union workers in the automotive industry earn $30 or $40 an hour plus benefits. Retirees get pensions and health benefits that would make anyone jealous. You guys spend millions of dollars a year lobbying to keep everything the same and now you're asking us, the taxpayers, for $25 billion.

Now, I don't know if a government bailout will rescue America's auto industry but I do know that if there is a bailout, it better come with a big, bright stop sign and lots of strings attached.

From the brain housing group of Nereus sometime around 10:17 AM