A shipmate who served in and out of uniform 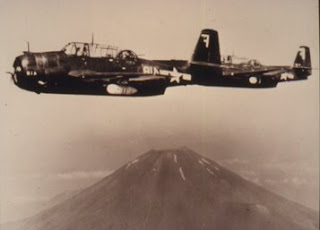 Paul Newman, died today at the age of 83.

Newman was sent to the Navy V-12 program at Yale, with hopes of being accepted for pilot training. But this plan was foiled when a flight physical revealed him to be color-blind. So he was sent instead to boot camp and then on to further training as a radioman and gunner.

During his two years in the Pacific the Newman luck held, especially on one occasion when his pilot fell ill and their aircraft was grounded. The rest of the squadron was transferred to an aircraft carrier operating off the coast of Japan, where a kamikaze hit the carrier, inflicting heavy casualties on the men and aircraft of Newman's squadron.

While he was with VT-99, training personnel in TBM-1Cs, TBM-3s, and TBF-1cs, the squadron moved to Eniwetok, then to Guam, and in January 1945 on to Saipan. This remained its base of operations until its decommissioning nine months later. A VT-99 contingent including Newman was aboard the aircraft carrier Hollandia (CVE-97), which was operating about five hundred miles off Japan when the Enola Gay dropped its atomic bomb on Hiroshima.

Finally, Paul Newman served with Carrier Aircraft Service Unit 7, one of many shore-based carrier air-group support units. CASUs operated the facilities, serviced and rearmed, made repairs, and handled routine upkeep and administrative duties. Newman's CASU was based in Seattle, conveniently located for his discharge at Bremerton, Washington State, on 21 January 1946. He was decorated with the American Area Campaign Medal, the Good Conduct Medal, and the World War II Victory Medal.

What he gave back
The Hole in the Wall Gang

The Hole in the Wall Gang Camp, in collaboration with its associated camps in the United States and abroad, provides children with cancer and other serious illnesses and conditions a camping experience of the highest quality, while extending year-round support to their families and health care providers. Through our Camp programs, on-going outreach to hospitals and clinics, and other services for children, families and caregivers, the Camp serves more than 15,000 annually. All of our services are provided free of charge.

Summer Program
Each summer more than 1,000 children between the ages of seven and fifteen from across the country and abroad attend The Hole in the Wall Gang Camp free of charge.

Year-round Programs
The Hole in the Wall Gang Camp provides year-round activities for campers and other seriously ill children and their siblings at Camp and in their own communities. Camp sponsored programs provide health care professionals and social workers with support and training. Retreats are organized for the children’s parents at resorts around the country offering respite, counseling, mutual support and positive activities, free of charge. For hospitalized children with serious illnesses, the Camp’s Hospital Outreach program takes “Camp-in-a-Suitcase” programs to New England hospitals and clinics, where it provides a bedside experience to raise the spirits and help sustain youngsters for the road ahead.

Support of Other Camps
The Hole in the Wall Gang Fund has helped to found other camps with missions similar to that of The Hole in the Gang Camp by providing medical, programmatic, architectural, accounting, and fund raising advice and financial support. For more information about these camps, please visit The Association of Hole in the Wall Camps.

Thank you for serving,

Rest your oars Shipmate
From the brain housing group of Nereus sometime around 10:57 AM

I had no idea he was a swabbie. I wrote a post about him this morning too.